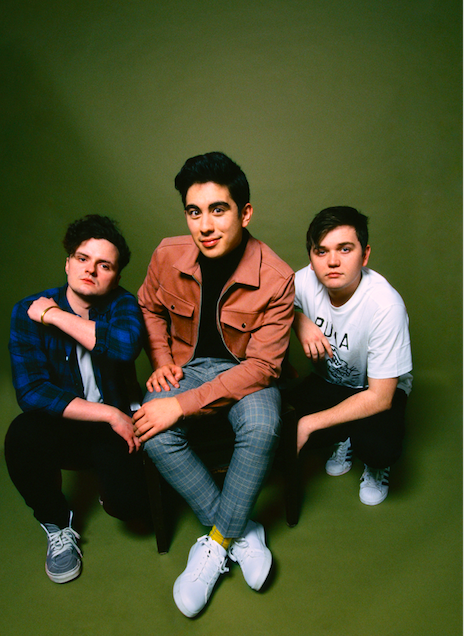 In a time where positivity is hard to come by, the Happy Fits are here with their transportive, sunny second album, What Could Be Better.

Turning a love for the Killers and Violent Femmes into their own compact pop songwriting, the New Jersey-based trio started as a casual summer project for high school friends Calvin Langman, Ross Monteith, and Luke Davis before going off to college. After their debut EP, 2016’s Awfully Apeelin’, took off on Spotify during their first semester, school stopped looking like the natural next step.

“Honestly, we didn’t know we were going to be a band,” guitarist Monteith says. “We came up with the title to record those four songs on our EP, and we thought that was going to be it, but once the songs got picked up and we really started questioning it, that’s when we decided to go for it and record the first album. When we left school was when we officially became a band.”

Following their 2018 full-length Concentrate, the Happy Fits have further honed their ambition for What Could Be Better’s collection of crowd-pleasers.

“Growing up, I was either in school, at home practicing, or at music school, and there was always this pressure to be really productive,” says primary songwriter Langman, who dropped out of conservatory to pursue the band. “When I decided that I wanted to do this for a living, being productive meant a totally different thing, because now I have to create things that are just in my head and make them real.  Measuring how productive that is in my life, it’s hard to do that. There’s a lot of dissatisfaction I feel. I write that into the songs, all of the guilt that I feel for not sticking with a normal plan.”

From the stomping “No Instructions” to the album-closing title track, What Could Be Better channels youthful malaise into songs that demand to be sung along to. “Moving” deploys Beach Boys-inspired harmonies for a classically feel-good sound, and the integration of Langman’s classical cello training will appeal to fans of early Vampire Weekend. Far from cloying, the band’s upbeat nature is rooted in a real desire to connect with a world that sometimes seems distant.

On “What Could Be Better” Langman sings, “There’s a hole in my consciousness where I feel I belong,” a line inspired by his isolation as one of the few Asian-Americans in his hometown.

“I don’t have crippling social anxiety, but I have always felt like I’m a bit different,” Langman says. “I grew up in rural New Jersey and was one of three Asian kids in my high school…Also, growing up, with Hollywood and TV shows, I didn’t see many people like me, especially half-Filipinos.”

As the band’s stages get bigger, Langman knows he gets to be the role model he didn’t have, saying, “It feels really good to be someone that Filipino kids growing up in America could look up to.”